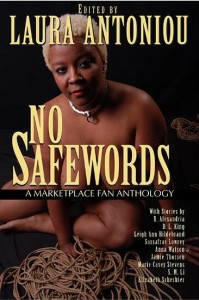 The full slate of writers contributing to NO SAFEWORDS runs the gamut of award-winning authors to bright-eyed new voices, as creator Laura Antoniou explains in her introduction: “As the saying goes, ‘blessed are those who embellish the tale.’ So here is the Marketplace, as seen through other eyes. There are some stories that show the world exactly as I created it, and some that push my boundaries a tad. There is romance and strife, glee and despair. There is hot sex, of course, but there’s also humor and melodrama. Just the way I like it.

There were some surprises for me! I was delighted to find several female dominant/male submissive stories, especially since my examples of those relationships tend to be supporting, rather than main characters. I was also pleased by the writers who weren’t afraid to go a little dark; a collection of stories all about slaves misbehaving in mildly inconvenient ways and getting fantastically, erotically punished would have been tiresome.

So whether you want a rollicking Victorian flavored tale of adventure and romance or a modern, sexy welcome to a new home for a familiar character, you will find flavors here to tempt or satisfy your tastes. Return for more time travel to a world where the language we so casually use to describe our tastes doesn’t even exist, but where longing for a ritualized order and discipline and a sense of belonging transcends words, and gets expressed in the rich metaphor—and reality—of a garden.

Then swerve away from romance to feel the terror of a slave newly sold to an owner who represents their worst nightmare, whether because of demographics or the enormous challenge of a language barrier.

Here, you can get into the reflection of a trainer’s long career or the grief and anguish of a new owner confronted with an inherited house full of property she didn’t choose. Or, watch how even the jaded, experienced ways of the Marketplace aware people become awkward in that most awkward of adult challenges—a marriage proposal.

Get a glimpse into the rarefied and formal household of an owner/spotter, and then take a detour to the desolate history of a young genderqueer punk fresh from the streets, confronted with the most iconic of Marketplace characters.

All of this—a synthesis of my imagination and theirs, fed by culture, fantasy, fairy tales and fears. All fiction is, in a way, fan fiction. I am sorry it took so long for me to see this and to open myself to the interesting sensations—you might call it edge-play—in giving people access to my favorite victims. But better late than never!”